Christina Kruse: Base and Balance 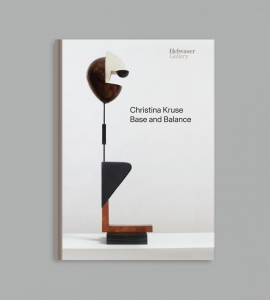 Published in conjunction with the exhibition Christina Kruse: Base and Balance, installed at Helwaser Gallery from May 30 – July 25, 2019.

A solo exhibition by New-York based artist Christina Kruse (b. 1976, Germany), Base and Balance presents the artist’s newest body of sculptural work completed over the last two years. This new direction builds on her previous body of photographic and collage works, introducing a spatial dimension to her practice. Drawing connections between geometric and organic forms, Kruse’s artistic practice thrives on the notion of construction, bringing together multiple materials into cohesive abstract forms.

This catalogue includes essays by John Zinsser and Joerg Trempler, as well as a foreword by Glenn Adamson.

In his essay titled “Heads and Bodies: Geometry and Allegory in the Works of Christina Kruse,” Zinsser puts Kruse’s work in conversation with early European modernism while also highlighting her capacity to find new meaning in a contemporary context. Through her ability to construct and deconstruct heads and bodies in an abstract manner, Kruse offers a philosophical inquiry into the role of the individual in today’s society.

In Joerg Trempler’s essay “Balance and Dynamics,” he examines the symbolic nature of presenting Kruse’s work on the hundredth-year anniversary of the founding of the Bauhaus, citing the influence of the German school on her work. Trempler explores Kruse’s affinity for spherical structures upheld by slender stands, likening her sculptures to human bodies with their suspended movements.

Trempler follows his essay with an interview with Christina Kruse, in which the two discuss her thought process in creating this balanced body of work. Kruse refers to her objects as “portraits,” infusing a sense of individual character and animation into each of her works. These nonrepresentational sculptures utilize simple geometric forms such as triangles and squares in order to delineate conflict or stability, respectively. Kruse expresses the deeply personal nature of her work, and attributes the constantly changing, perfectionist nature of her work to living in New York City.