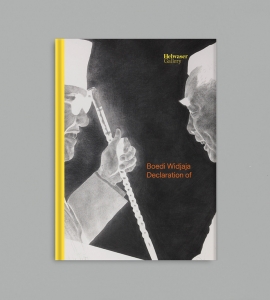 Published in conjunction with the exhibition, Boedi Widjaja: Declaration of, installed at Helwaser Gallery from September 11, 2019 - November 7, 2019.

The most personal series of work by the artist to date, Widjaja focuses on an archive of press images taken of the founding president of post-independence Indonesia, the artist's original homeland. Using these images, Widjaja reappropriates them into graphite drawings. Described as "austere, portraying specters of historical figures", these works are "quiet acts of reflection and recuperation", which "examin[e] the transformative possibilities that a single image holds", according to Shona Mei Findlay, Curator of Asia Programs, KADIST Foundation.

Chen's essay delves into the processes that the artist utilizes in the development of Imaginary Homeland, connecting it with theories of photography, memory, and shared national identity. In Findlay's essay, she discusses the significance of Widjaja's works in the geo-political context of post-independence Indonesia in the Cold War era.