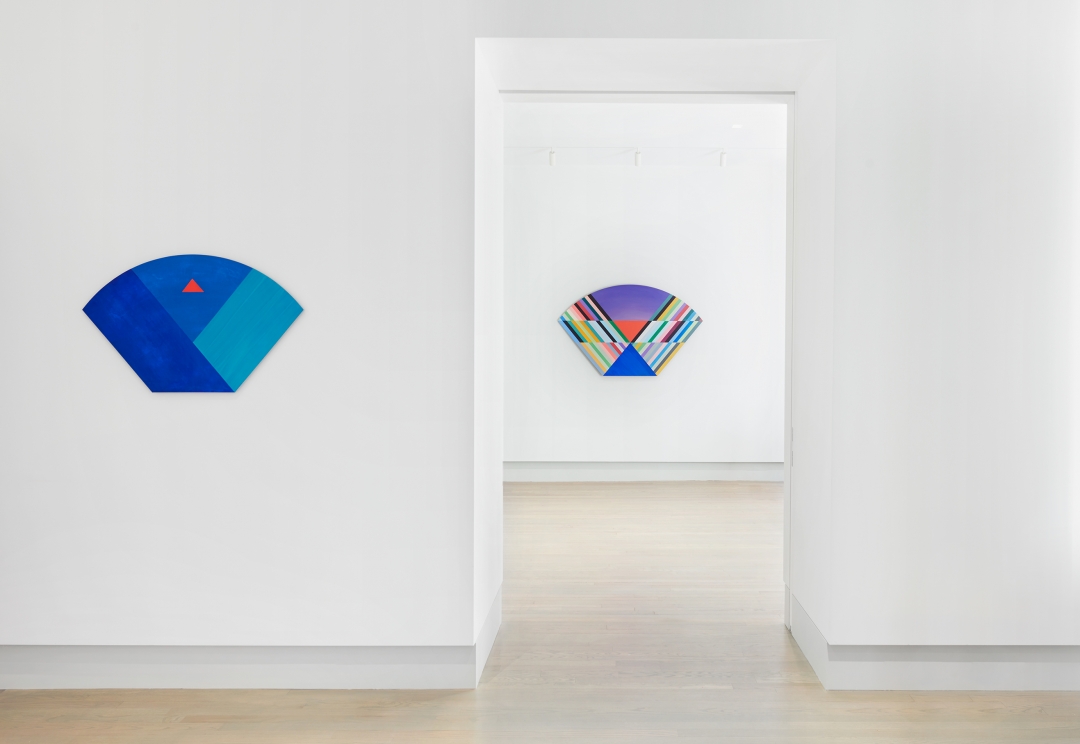 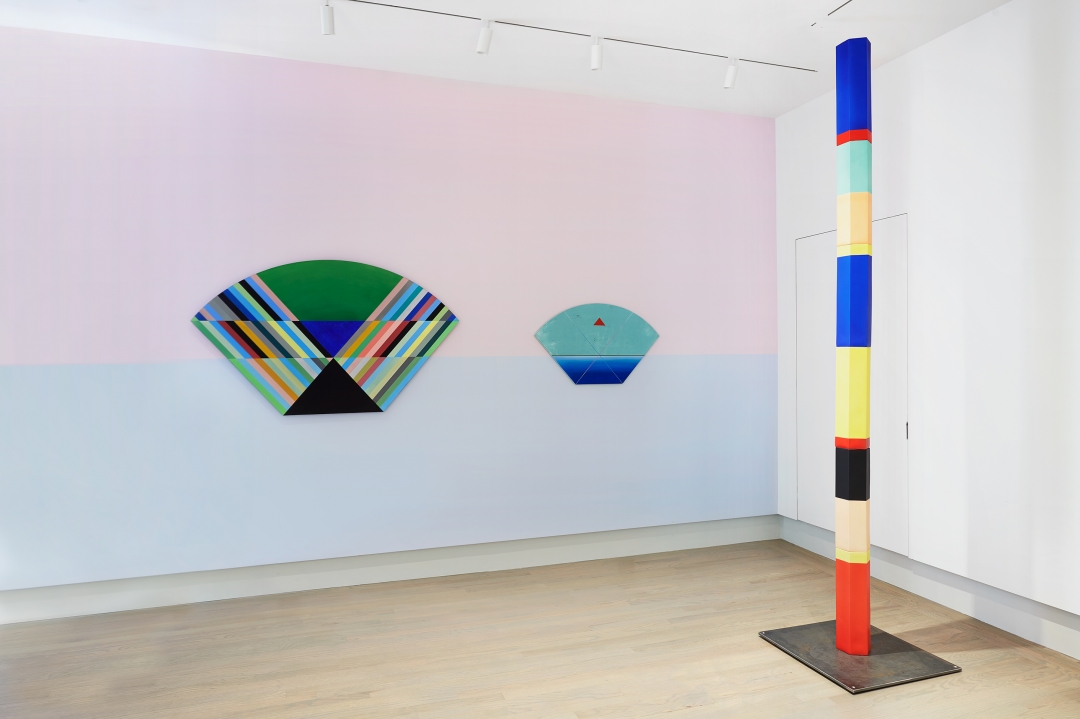 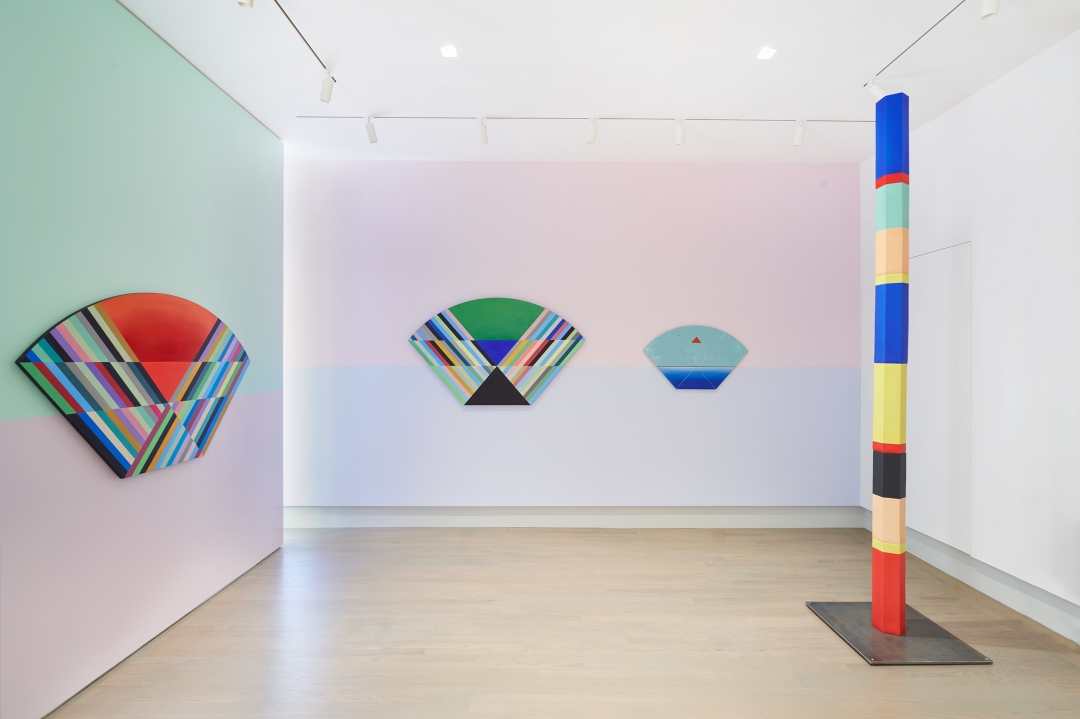 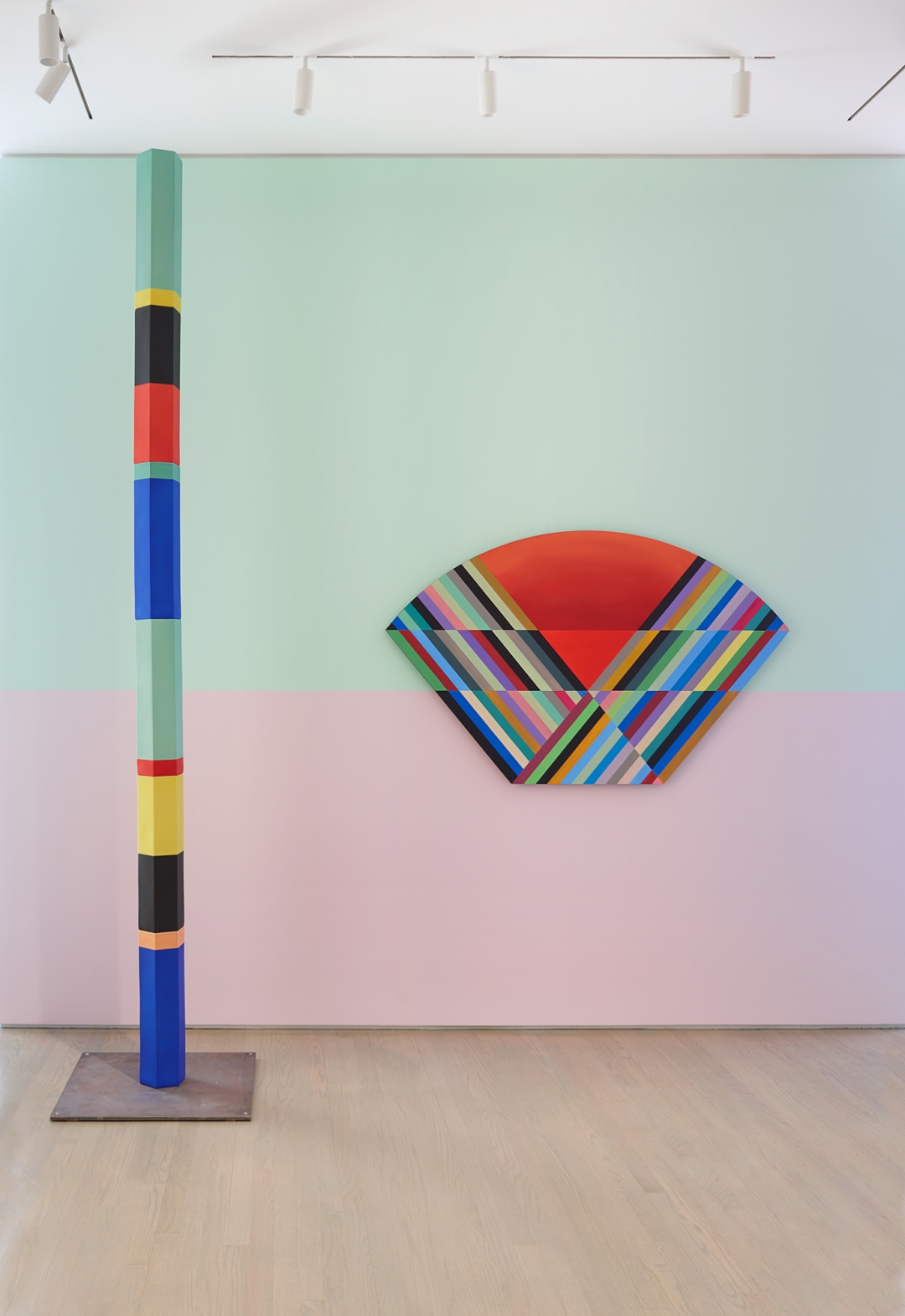 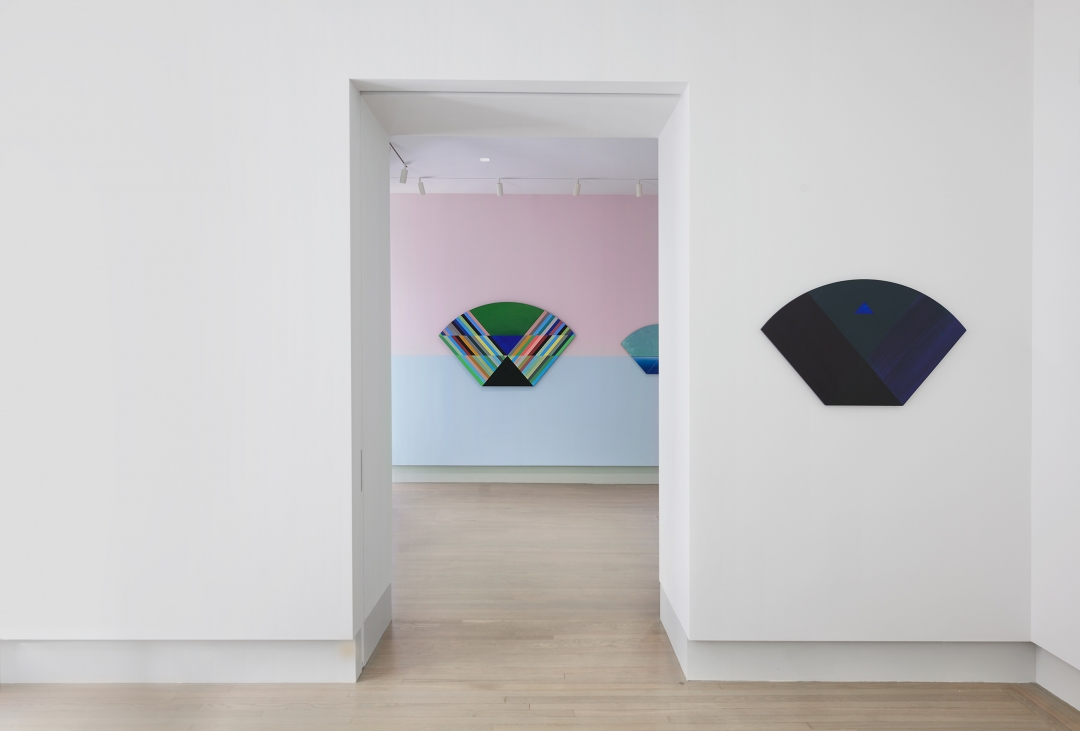 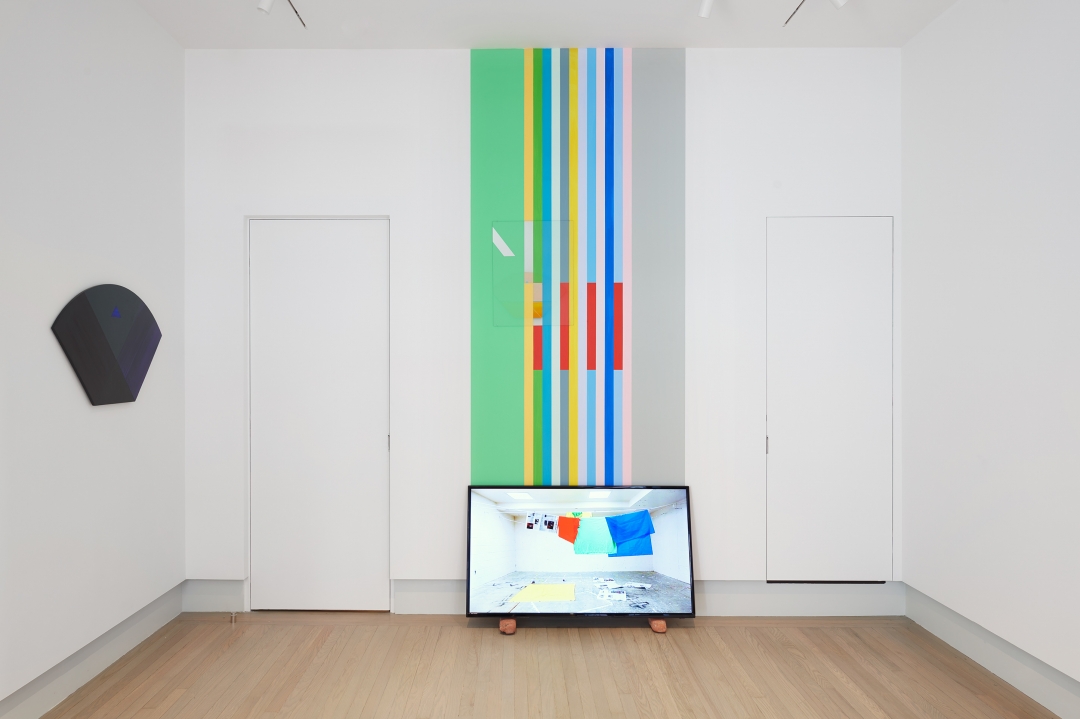 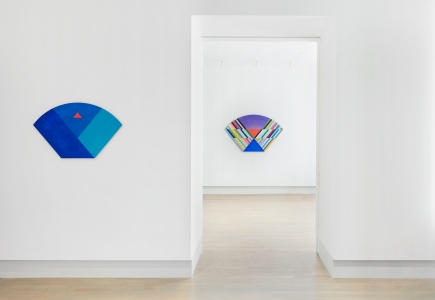 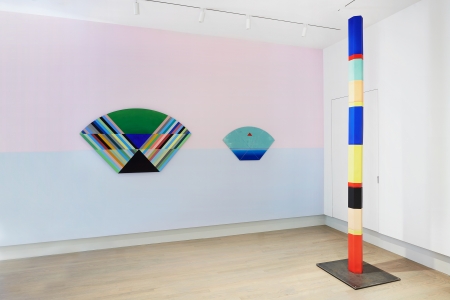 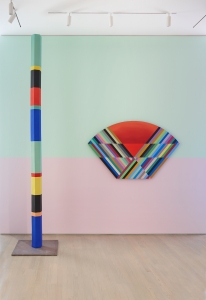 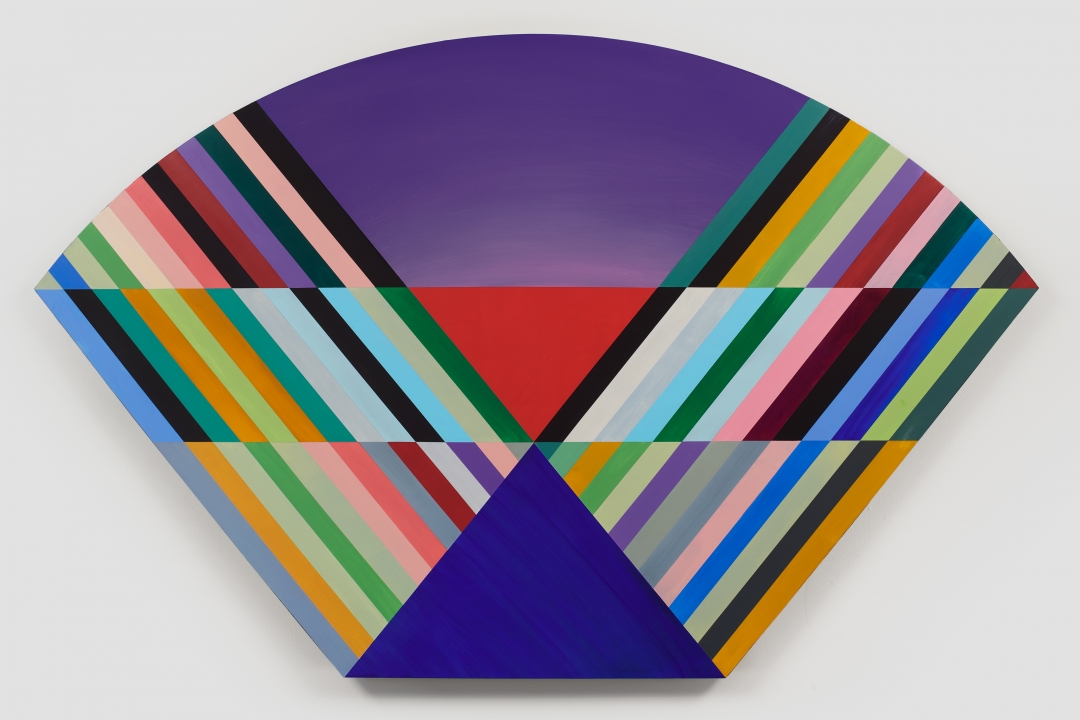 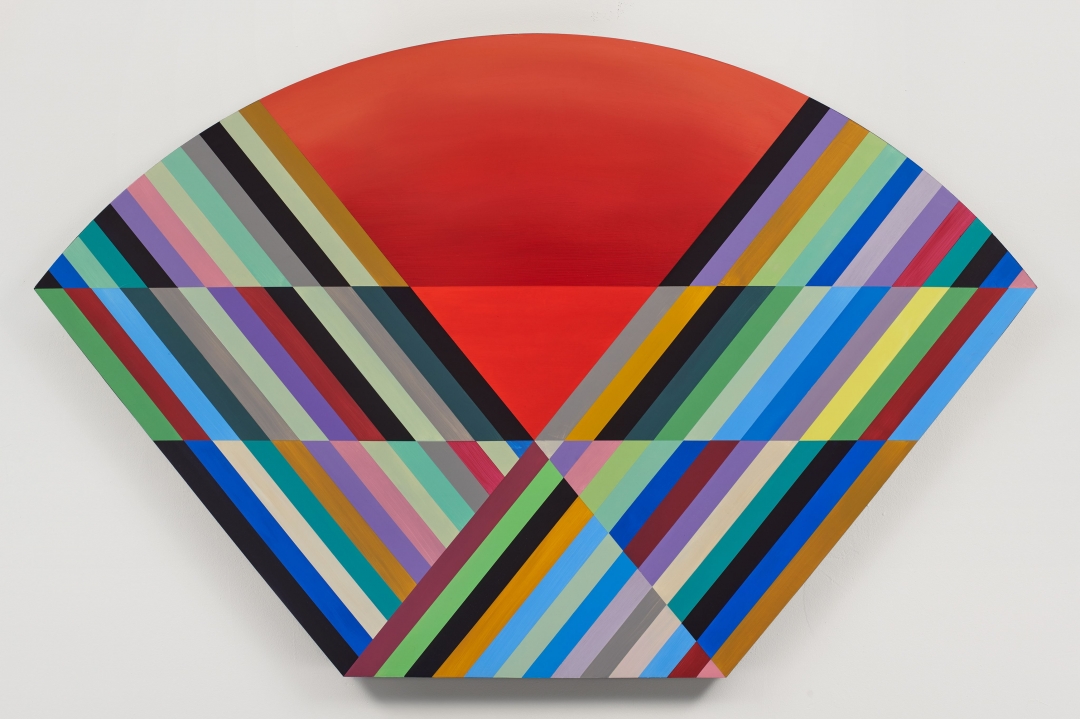 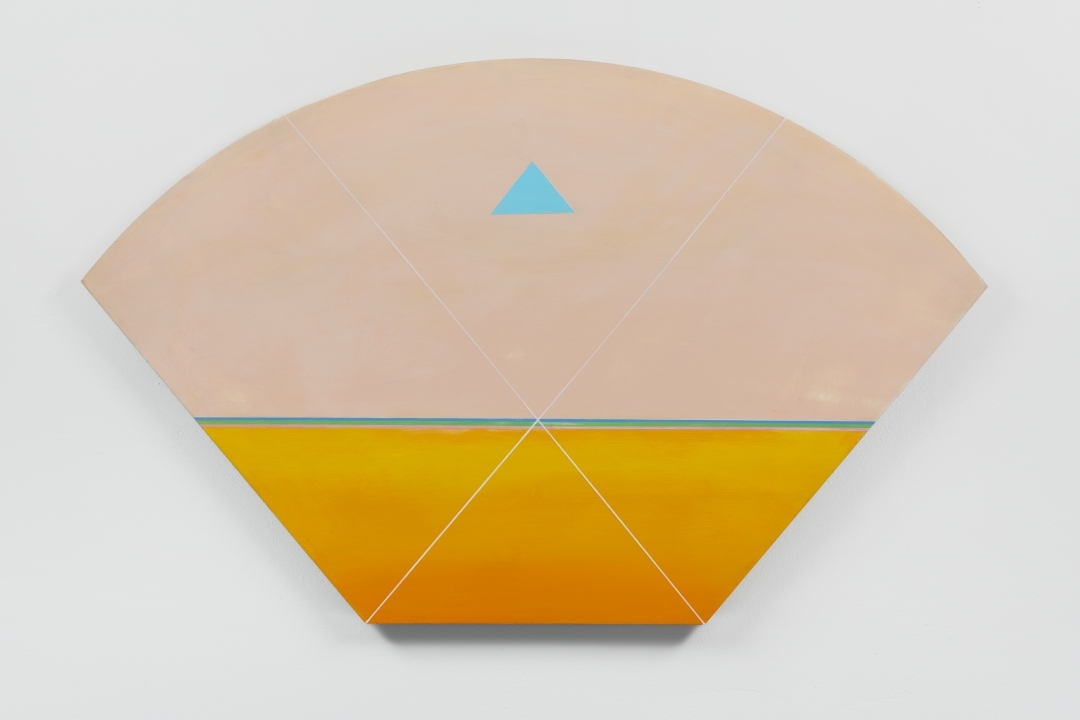 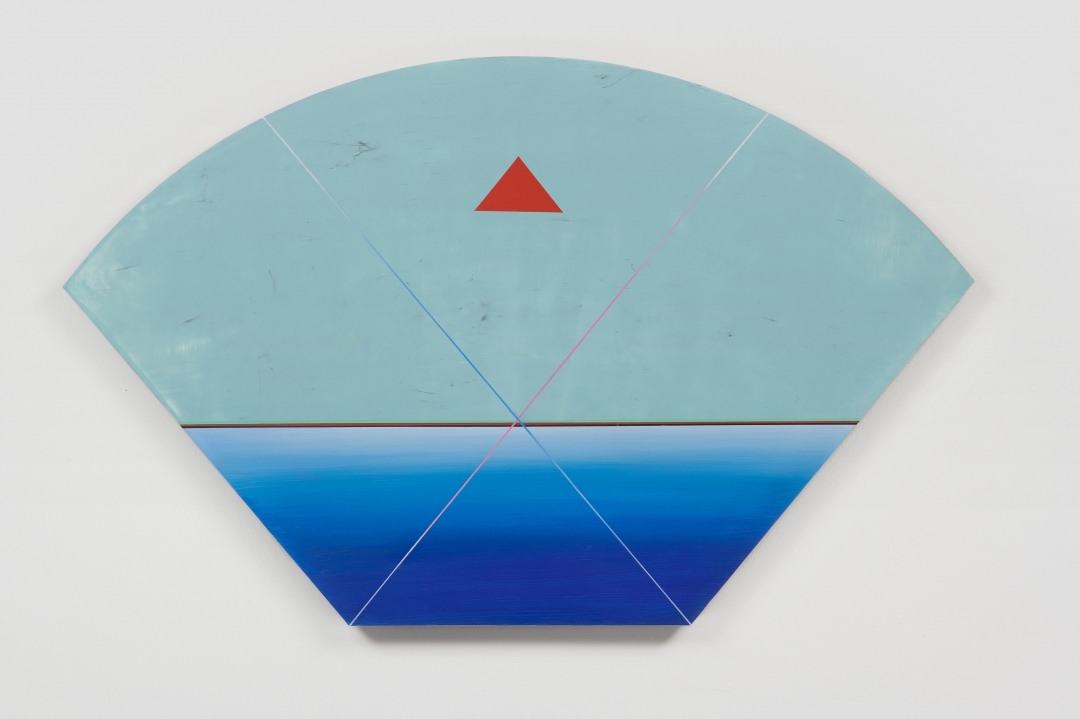 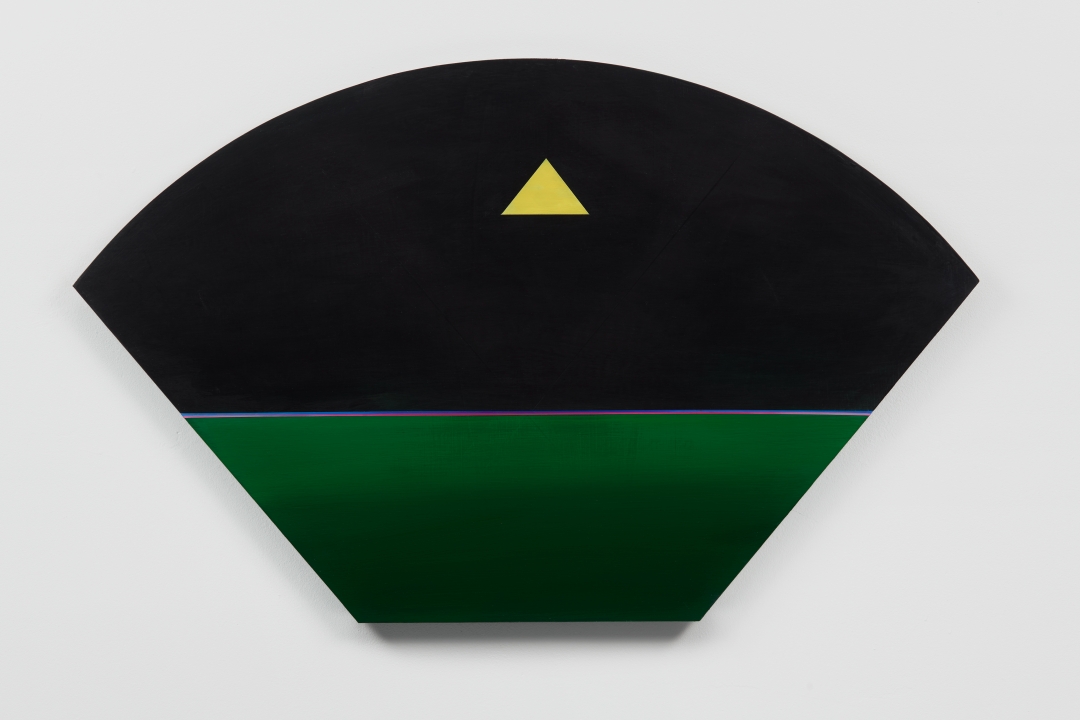 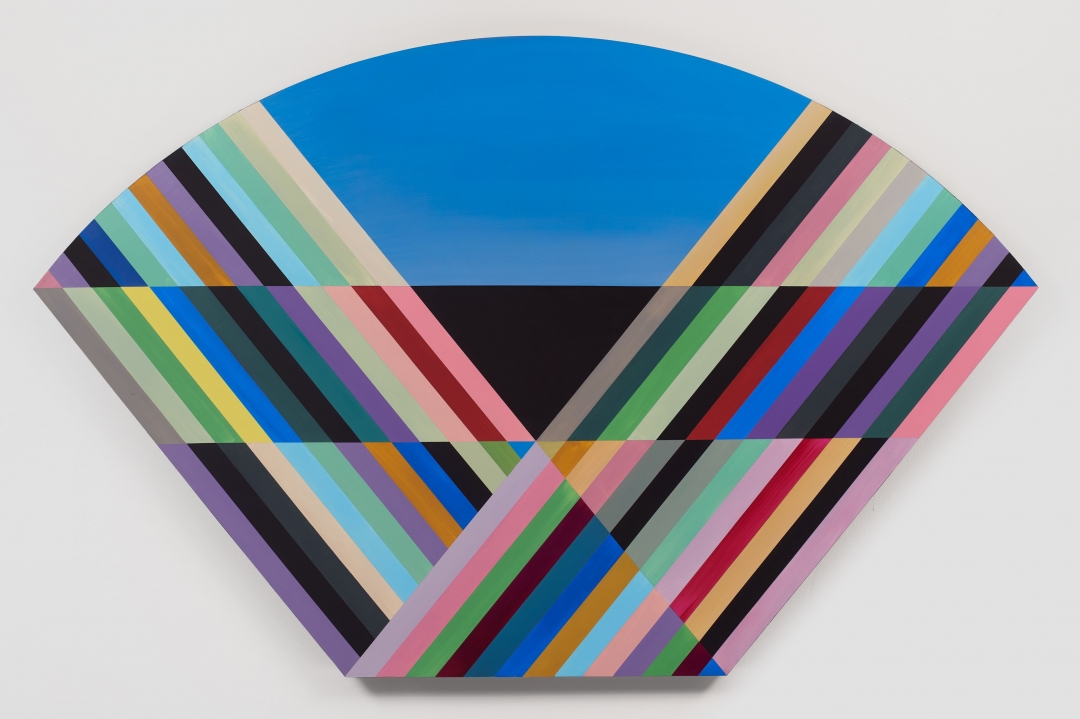 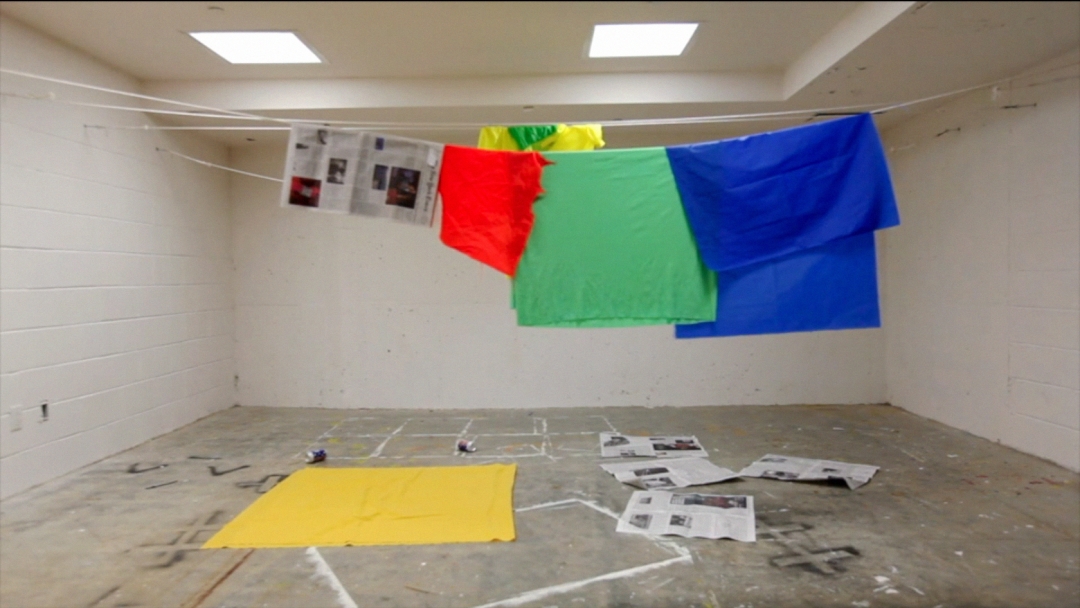 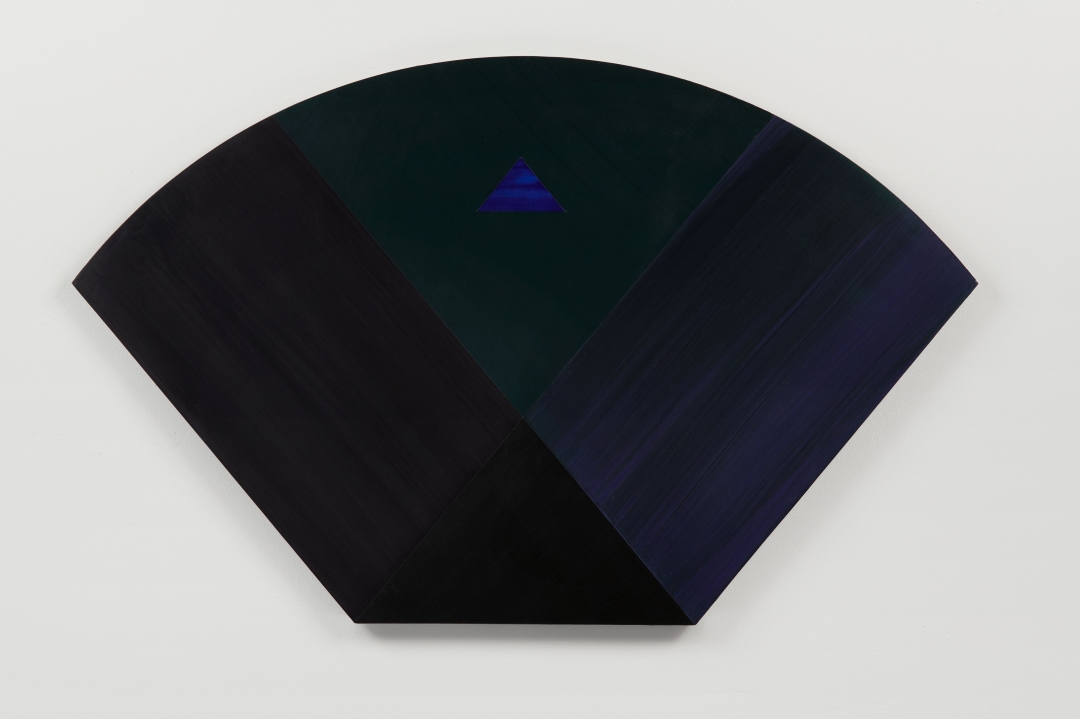 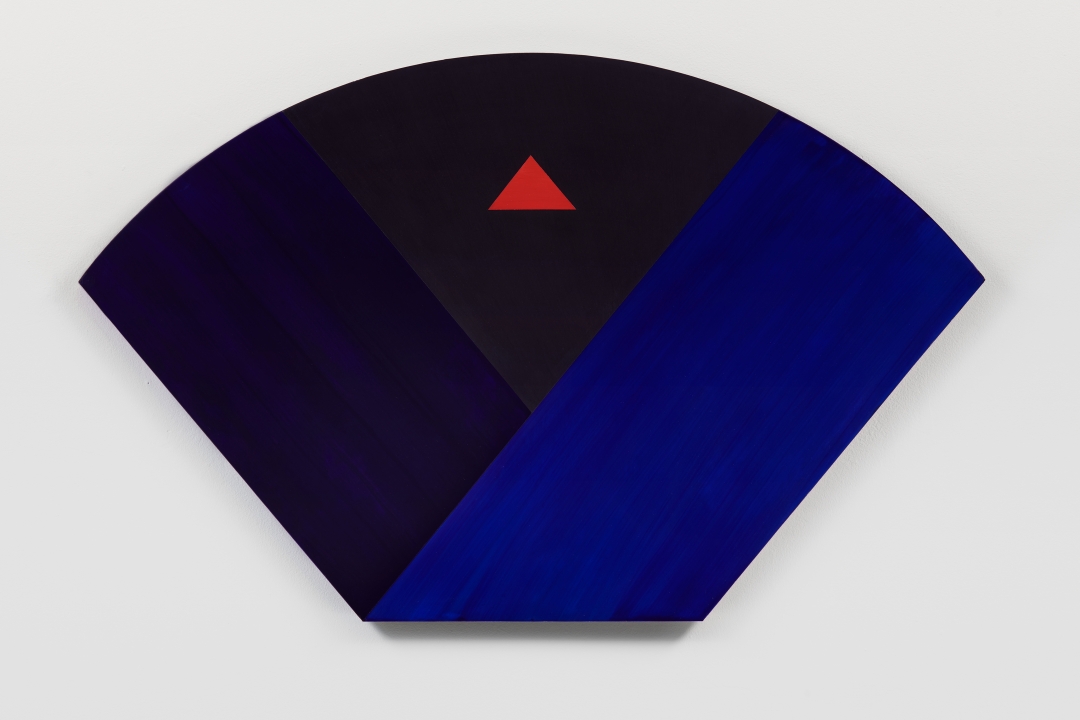 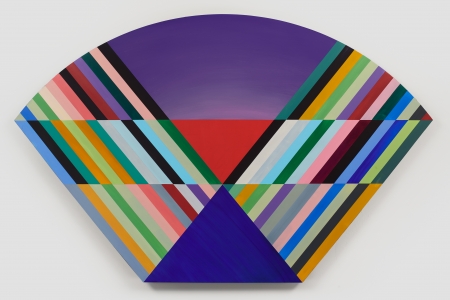 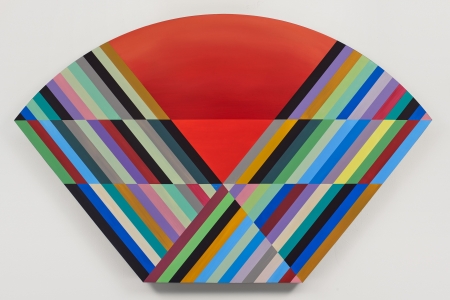 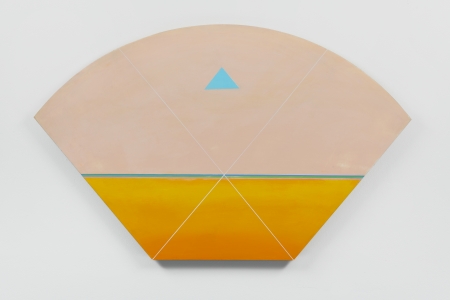 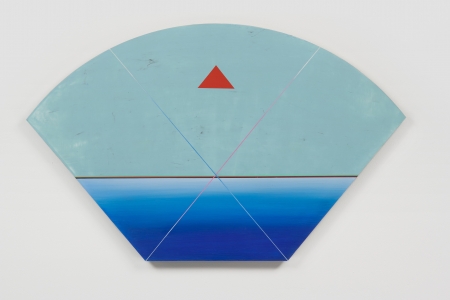 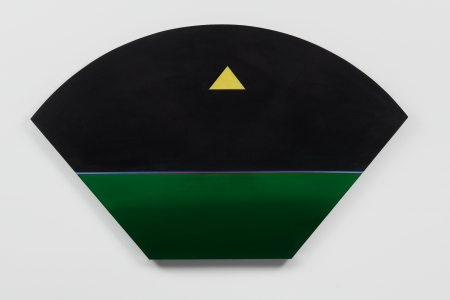 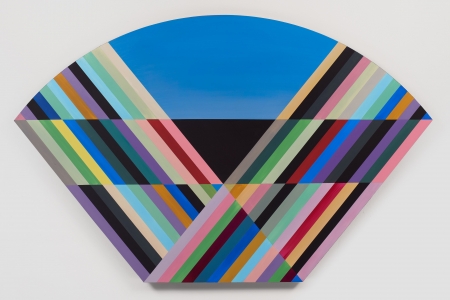 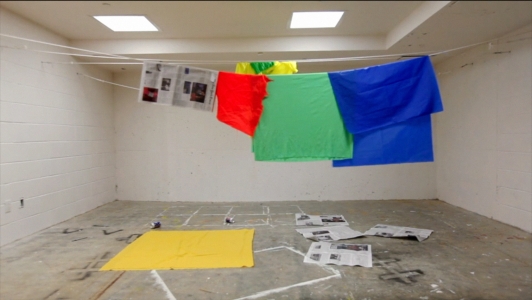 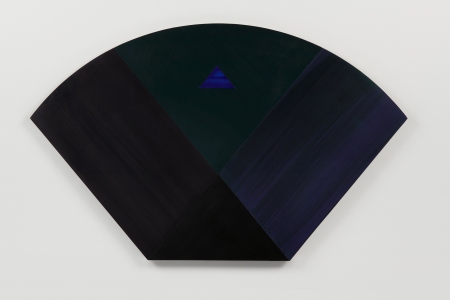 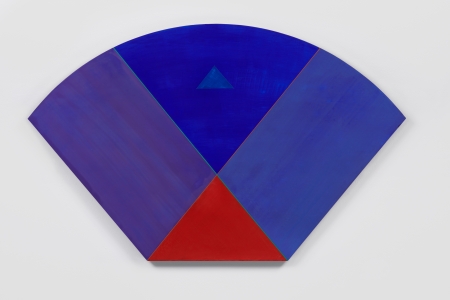 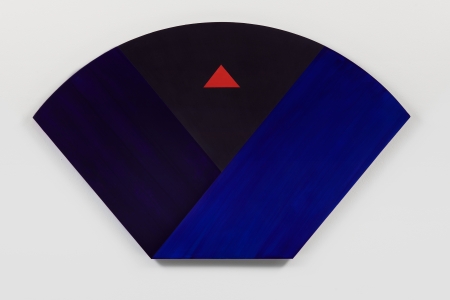 Artist-in-Conversation with Meghan Forbes: Saturday, 13 April 2019 from 2 to 4 pm

Helwaser Gallery is pleased to present VIEWs, a solo exhibition by Anton Ginzburg. The exhibition introduces the newest body of works by the artist, which includes the VIEW painting series, a site-specific mural, and ceramic sculptures. VIEWs presents Ginzburg’s engagement with the development of modernist-formal vocabulary in Eastern Europe, which addresses theories of viewing. Marking the inaugural exhibition at Helwaser Gallery’s new location (833 Madison Avenue, Third Floor), the show will be on view March 28–May 23, 2019, with an opening reception to be held Thursday, March 28, 2019. The core of the exhibition is the VIEW painting series. Executed on wooden panels of two distinct sizes, each work references diagrammatic representations of the binocular field of human vision. Based on the shape and geometry of the panels, abstract compositions are developed through color, plane, and line.

In smaller-scale works, different planes of color overlap and intersect with each other, demonstrating the figure and ground perception within each work. In larger works, Ginzburg draws on the effects of the movement of color through space. Collectively, the VIEW series analyzes the act of viewing and demonstrates the process through the material practice of painting.

Also on show are Polychrome Column 10A_01 (2019) and Polychrome Column 10A_02 (2019), a pair of multi-colored porcelain sculptures measuring 10 feet in height. Segmented into different colored modules, which are stacked on top of each other, the columns introduce a spatial dimension to the exhibition. Accompanying these columns is a site-specific mural, comprising bands of colored lines with mirrored, glass pieces superimposed over it. Placed in dialogue with the space of the gallery, these works create a dynamic viewing process, allowing visitors to immerse themselves within the works. Also presented in the exhibition, the artist’s earlier video work Color and Line (2013) echoes this notion of space. A playful interpretation of Suprematist paintings and cinematic structure, the work was filmed in a laundry room, in between “cuts” of darkness (achieved by switching on and off the lights), creating a continuous sequence of color compositions that vary in placement. Ginzburg’s practice explores the direct relationship between the viewer and the process of observing. Through referencing theories of viewing proposed by two artists of historical avantgarde, Mikhail Matyushin and Władysław Strzeminski, Ginzburg applies his own methodology to painting, sculpture, and video.

This inquiry began three years ago during Ginzburg’s residency in Canada in 2016, where the artist engaged in visual exercises used in the curriculum of the VkHUTEMAS (a modern art and technical school established by the Soviet Union in 1920). These exercises included color and spatial studies, photography, and graphic explorations, which strived to re-animate the avant-garde methodology of the 20th into the present-day context.

Meghan Forbes is currently the C-MAP Fellow for Central and Eastern Europe at The Museum of Modern Art, New York and a Visiting Scholar at the Institute for Public Knowledge at New York University. She holds a Ph.D. from the Department of Slavic Languages and Literatures at the University of Michigan, Ann Arbor. Meghan recently co-curated the exhibition BAUHAUS↔VKhUTEMAS: Intersecting Parallels (2018) in the MoMA Library. She is the sole editor of International Perspectives on Publishing Platforms: Image, Object, Text (Routledge, 2019). Besides her academic publications, Meghan publishes regularly in venues of wider readership such as Hyperallergic, Literary Hub, The Los Angeles Review of Books, Words Without Borders, and the Michigan Quarterly Review.

Based on Madison Avenue in New York City, Helwaser Gallery specializes in post-war and contemporary art, featuring seminal artists such as Alexander Calder, Helen Frankenthaler, Adolph Gottlieb, and Yayoi Kusama. In 1986, the gallery was founded in Paris and initiated significant exhibitions, including a retrospective on Jean Dubuffet (1996), and others on French cubist masters, notably George Braque, Jean Metzinger, and Pablo Picasso. In 2008, Helwaser Gallery marked its inaugural relocation to New York with the group exhibition Red, exhibiting Hans Hofmann, Andy Warhol, and Jean-Michel Basquiat amongst others. Helwaser Gallery reopened its new space in 2019 with a public exhibition program, presenting contemporary artists Anton Ginzburg, Christina Kruse, Boedi Widjaja, and Lin Yan.