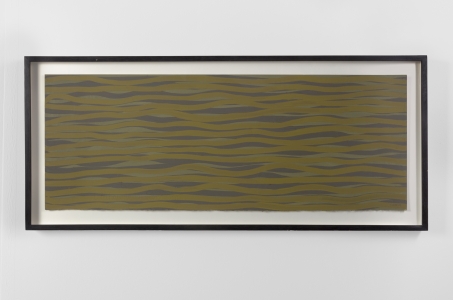 Sol LeWitt (b. 1928, Connecticut; d. 2007, New York) was one of the pioneering figures of Minimalism and Conceptual Art. Best known for his instructional works of art, where a rubric of formal instructions comprised the artwork, LeWitt was best known for his Wall Drawings, where various lines and forms were applied directly to walls. LeWitt wrote in 1967 that “When an artist uses a conceptual form of art, it means that all of the planning and decisions are made beforehand and the execution is a perfunctory affair. The idea becomes a machine that makes the art.” Moving to New York after serving in the Korean War, LeWitt  attended illustration classes, and worked as a graphic designer for several magazines. Establishing himself in the 1960s as a leading figure in art, LeWitt's ouevre spanned painting, drawing, and printmaking. LeWitt also cofounded the artist book nonprofit Printed Matter, Inc. in 1976, and influenced many other artists such as Frank Stella and Eva Hesse. His work can be found in the collections of the Art Institute of Chicago, the National Gallery of Art in Washington, D.C., the Tate Gallery in London, the Dia Art Foundation in Beacon, NY, and the Walker Art Center in Minneapolis.