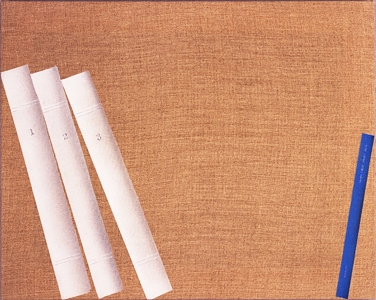 Ed Ruscha (b. 1937, Omaha) is best known for his works that blend Pop Art imagery with the principles of Conceptual Art. With a practice that spans drawing, painting, photography, film, and printmaking, Ruscha achieved recognition for his paintings that incorporate words and phrases, linking him to the beat generation. Growing up in Omaha, Ruscha moved to Los Angeles to study art. The landscapes of Los Angeles and Southern California have often figured prominently in his works, as with its vernacular culture and life. In 2016, Ruscha's practice was the subject of a significant solo exhibition, entitled "Ed Ruscha and the Great American West" at the de Young Museum, San Francisco, which included 99 works. Other significant exhibitions have been held at the LACMA, Los Angeles, Kunstmuseum Basel, Haus der Kunst, and the Museum of Contemporary Art, Chicago. His works are held in the collections of The Museum of Modern Art in New York, the National Gallery of Art in Washington, D.C., the Tate Gallery in London, the Los Angeles County Museum of Art, and the Walker Art Center in Minneapolis.